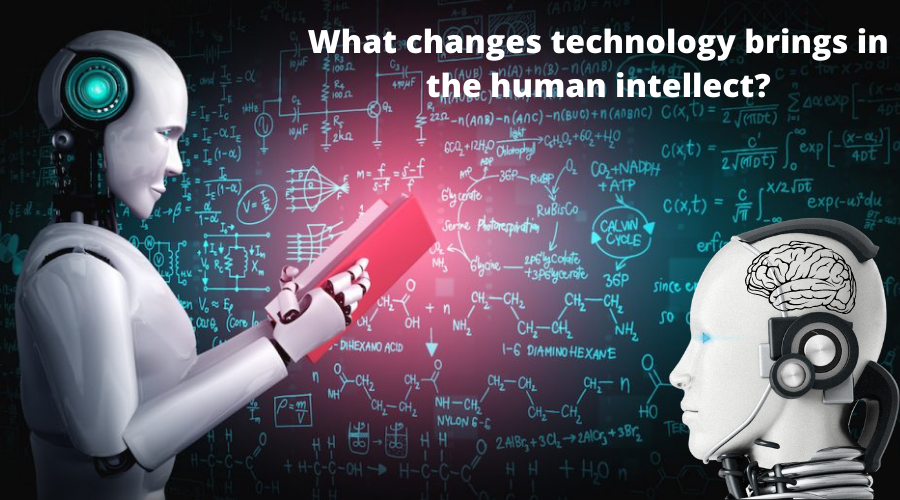 Today, I’d like to speak a little bit about what I think is the greatest partnership of all time: humanity and technology. This unique relationship began over three million years ago when one of our hominid ancestors began making the very first edged stone tools.

This act set us on a path of coevolution with technology that we have been on ever since. It’s been responsible for our survival and thriving as a species these millions of years, and it very well may be essential to our success in the future as well. It’s an interesting word – coevolution. It’s usually used to refer to a reciprocal interaction between two living species, and, of course, we don’t typically talk about technology in this way.

But in many respects, technological evolution does follow many of these patterns. One of the big things about why creating edge stone tools was so important was because of how it changed our brains. People don’t give enough credit to how radical an impact this had on us as a species. Using two stones to create a razor-sharp edge is not as simple as it seems. It takes coordination and dexterity, it takes a significant amount of patience and self-control, and it takes an ability to follow step-by-step sequences.

Not only that, but this process needed to be passed along, not for one or two generations, but literally across tens of thousands of lifetimes for over three million years. But the most amazing thing is how it rewired us. Yes, creating these tools improved our diets, they protected us from predators and rival clans, but they also changed our brains. We’ve been finding more and more evidence of this in recent research on modern humans.

In one study, volunteers had their brains scanned before and after performing about 100 hours practicing this task. This is about how long it takes a modern human to become just moderately capable of this task. Astonishingly, they found an enormous increase in the number of new neural connections in those regions of the brain specifically tied to coordination and dexterity, patience and self-control, and future planning. Now, can we say definitely that our hominid ancestors, with their much smaller brain cases, that they were affected to the exact same way that a modern human was? Not necessarily.

But a lot of the evidence would indicate or suggest that they probably were. Since that time, we’ve continued to develop technologies, very slowly initially, and more and more rapidly in recent years. and in the sense of when we say technologies, this is really a broader sense, that it doesn’t just include tools, and machines, and devices, but also society, art, culture, and all the other things we associate with our rise as a species. And all the way along, it’s been transforming us.

I think this is ironic because how many times have we heard someone say, “Oh, technology is ruining us,” “We’re becoming more like our machines,” “We’re losing our humanity”? This, by the way, is an argument that goes back at least as far as the Greek philosopher Plato. The fact is that we owe our existence as the species we are today to this very relationship, this very interaction and this process. We wouldn’t be who we are without it. And so, in light of all of this, in light of this coevolution, I think we have to ask ourselves,

What does this mean for our future?

Now, despite all of the amazing things that we can do with technology, it hasn’t escaped us that many of the challenges we face today are a direct consequence of our success as a technology-wielding species: global climate change, resource depletion, weapons of mass destruction. And there are thousands of scientists who believe that, in a matter of decades, we may face even greater threats: biotechnology hazards, nanotechnological weapons, artificial intelligence run amok. Any one of these could be here in only a matter of years.

Just consider if artificial intelligence was to become sufficiently powerful and extremely intelligent, becoming what’s sometimes referred to as a “superintelligence.” This is something that many scientists believe could happen by 2050 or 2060 – the middle of this century. Now, even if it turns out to be impossible for a machine intelligence to become conscious or self-aware, any number of things could happen that could wipe out the human race before we knew what hit us. This isn’t because we might accidentally create a malevolent superintelligence, as we see so often happen in science fiction novels and movies.

That’s fiction. A much greater concern is that this intelligence would be so foreign to us, so entirely different that it wouldn’t be able to identify with or share our goals and values – the things that are important to us – and so would essentially be a stranger to us, caring no more about us than we care about an insect or a microbe. And you can see that that might not be in our best interests. So, in light of all of this, in light of the rapid change that is taking place in our world, the number of problems we’re creating, the increased complexities.

Wow are we going to keep up, much less deal with all of these issues?

Well, part of the solution may lie in the fact that even as we’ve been raising and lifting up technology, it’s been doing the same for us. Put it another way, the accelerating change we see in our world has been transforming us too, and therein may lie part of the answer to our dilemma. When talking about coevolution, people will often say, “Oh, that’s fine for biology, but that’s not how the technology works.” To a degree, they’re correct. We don’t evolve the same way. But evolution is about change, not about the specific process such as natural selection.

And so, in many respects, technological evolution does follow many of the same patterns as well. Consider how we often take inspiration from biological species as an inspiration for creating a new device or some mechanism, what Scofield called biomimetics. It’s generally understood that different origins place different constraints on a possible solution. Put it another way, if we have a bird and an airplane, we can take inspiration from avian flight.

We can study bird mechanics for years. But if the Wright brothers had insisted on designing a plane that flew as birds do by flapping its wings, they never would have gotten off the ground. The same goes for technological evolution. There is this ongoing cross-pollination of ideas. This continual transformation based on niche opportunities, available resources, and what’s come before, all driven by a marketplace of competitive forces that are subject not to fitness in a natural environment, but in a world driven by human end-users, and the competitive value they gain from this.

Why is technology important to you?

Because this coevolution hasn’t stopped, it’s still going on today, accelerating, affecting all of us, altering us, incrementally bringing us closer to our technology. Just consider how much over the past 50 years or so we’ve converged with technology. We haven’t done this to make ourselves more machine-like, but to improve the human condition, to repair and replace lost function. Think about how many millions of lives have been improved or even lengthened by introducing permanent technologies into people’s bodies: pacemakers, insulin pumps, cochlear implants, deep brain stimulus, artificial bones, artificial hips, and so forth. This is a trend that’s only going to continue and accelerate.

Except in the not-too-distant future, it’s also going to not only restore and replace lost function, but improve it as well. One area that’s seeing tremendous advances in recent years are Brain-Computer Interfaces or BCIs. These devices will allow us to one day be able to access vast amounts of information and processing power with but our thoughts, and it’s not that far away. We already have work being done in the labs, using brain waves to be able to send messages, to play video games, to operate robotic wheelchairs.

The day’s not that far off, perhaps the mid-2030s, when we’ll be able to use mentally addressable software agents that can access all of the world’s information for us with but thoughts. These devices will act as our intermediaries with the vast technological landscape around us including the superintelligences of the world. In many respects, our descendants may become the superintelligences we so fear today.

But if this happens, there will be one very, very important difference, and that is that they will still share our goals and hopes, our dreams, our values; they’ll still be human. Years ago, Marvin Minsky, one of the founders of artificial intelligence was asked, “Will robots inherit the earth?” To which he replied, “Yes, but they will be our children.” (Laughter) This may be the future of our evolution. No one changes themselves unnecessarily without good cause. But if there’s a significant competitive advantage, if our survival is at stake, we’ll do it every time.

This is also why so many companies and countries are racing to develop powerful artificial intelligence, because whoever has it first is going to have such an enormous competitive advantage. But there’s another reason that we should embrace this future, because intelligence has always been our superpower as a species. Compared to other predators, we’re weak. Our teeth and nails are useless against other animals in a fight, and even Usain Bolt is a slowpoke next to a cheetah or a lion. (Laughter) And yet, our intelligence has allowed us to become the most powerful species on this planet.

Time and again, it’s saved us and allowed us to survive and thrive as a species. Except now, we’re up against a wall of our own making, and we’re not going to evolve enough new intelligence rapidly enough to be able to deal with the many complexities of the problems we’re generating. But, a blended intelligence made up of the best aspects of machine and human intelligence – that could be a real game-changer. As well as helping to solve many of our world’s ills, this could be our next stage of evolution.

As well as helping us to be better prepared for dealing with many of the complexities we’ll face in the future, this may actually be what allows us to expand this civilization beyond this tiny blue dot we call Earth. In the end, the merging of the two most powerful intelligences on this planet may one day allow us to seed the universe with those rarest and most precious of gifts: life, intelligence, and consciousness. Will humanity and technology still be thriving millions of years from now, journeying beyond this planet and throughout the cosmos? No one knows for certain, but I remain hopeful for our shared future.