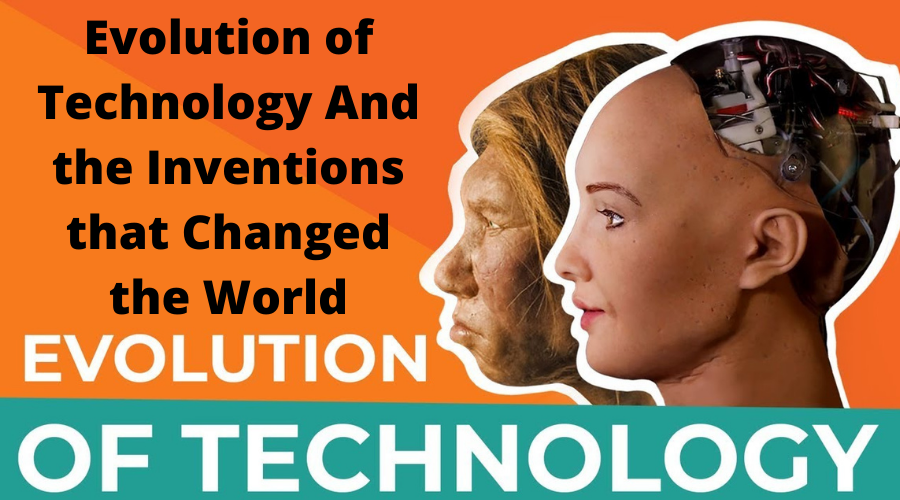 Nowadays, it feels like every week another ground-breaking invention or idea is revealed. But how did we get here? In this article we’re going to look at the evolution of technology from the very beginning. We’ll go through some of the most influential devices and concepts that have led us to the techno-fuelled world we live in today.

Our time travel journey starts pretty much when we did, before selfies, trolling, open-world gaming, and cheesy infographic videos, way back in 35,000 BC with the first recorded example of counting. It all began with a simple tally on a bone – the Lebombo bone. Talk about upcycling! More conveniently, Papyrus paper was invented in 3,000 BC for recording and the Abacus in 2,300 BC for sums. These had evolutions of their own for the next couple of millennia up to around 100 CE where they reached a state of how we know them today.

This was also the time Hindu Arabic numerals were developed, not the first characterized numbers but ones which allow complex mathematics. Jumping to the second millennia we have the development of the Torquetum – a complex analogue computer used to measure astronomical coordinates and is the bases for all modern astronomical instruments. The Torquetum was the first device used for the observation of Hayley’s Comet.

Is Technology Moving Too Fast?

Equally terrifying and amazing In 1206 came one of the first examples of the concept of automation with Al-Jabari’s Programmable automata which helped to fuel the ideas of mechanical humans and artificial intelligence. Recently, evidence was discovered showing that the first mechanical calculator was conceived in 1502 by none other than Leonardo da Vinci – who apparently invented everything. However, nothing came of it and after a few manual calculation systems, the first mechanical calculator was realized as Pascal’s Calculator in 1642. Shortly after, we got the binary system.

But It wasn’t until the 1800s that technology was advanced enough to take advantage of it. Starting with the Jacquard Loom, which used punch cards to automatically weave designs, then leading to Babbage’s concept of the difference engine and later the analytical engine. Unfortunately, these last two projects weren’t actualized due to funding but that didn’t stop the world’s first computer programmer Ada Lovelace from seeing how they could work and writing the first ever algorithm.

Also read || What is Competency-Based Education?

Then we literally captured lightning in a bottle and harnessed electricity, we performed the census with a tabulating machine for the first time, the triode was invented – essential for the development of television and radio, we came up with the idea of a thinking machine – the first ever robot in the sci-fi film “Metropolis”, and the Turing machine was conceptualized. All this played a huge part in the creation of the first ever electric computer in 1939 – The Atanasoff-Berry Computer. Work on the Atanasoff-Berry was discontinued due to World War II, but other computers built for the war effort, like the colossus and Zuse Z3, were developed. During the war a model for computational neural networks was created.

After the war had ended we got the ENIAC – the grandfather of digital computing, the UNIVAC for business and government, the transistor, and the first thinking machines in the SNARC and the IBM 701. In fact, this was the first computer that displayed AI capabilities as it learned to play checkers. The 50s saw another step forward in machine learning with the Logic Theorist – a program designed to mimic the grammar skills of a human and dubbed the first AI program. This decade also sees the integrated circuit which in the 60s was starting to be used in digital computers.

This gives us the first ever minicomputer – the PDP 1 which, in turn, creates the need for the mouse and graphical user interface. We also got Eliza, the first ever Chatbot. The end of the 60s saw programmable calculators, super computers, operating systems and the introduction of ARPANET, the internet’s humbler and less complex older sibling, and of course the Apollo guidance computer.

The 1970s saw these technologies become commercial and with that came a flood of new developments – the Honeywell 316, Canon Rocktronic, the first DRAM and microprocessors, the iconic floppy disk, the first humanoid robot, and the first commercially available microcomputer. The decade saw plenty of improvements to the technology including Microsoft’s first programming language, and IBM’s and Apple’s original entries into desktop computing. The end of the 70’s saw the first automated vehicle – the Stanford cart – and led us into the 80’s where technology was quickly getting smaller, cheaper, and more powerful. We also find the development of backpropagation and the CD ROM. During this time, tech is becoming so compact that the Gavilan SC is marketed as a ‘laptop’ computer. AI is also making leaps and bounds with Cyc, a project aiming to build a knowledge base of basic concepts, ‘rules of thumb’ and common sense to assist AI applications perform human-like thinking.

In the following 5 years we get handheld computers, AI that teaches itself to speak, the first versions of windows and excel, plenty of supercomputers, laptops, desktops, processors, and in 1989 we get the world wide web. The web and some big leaps in processing power in the early 90s brought PCs into the realm of entertainment devices. This decade introduced us to PC gaming, DVDs, internet browsers. We got some of the first mobile phone devices from Nokia to fit in our hands and super computers that are now able to beat human master chess champions with Deep Blue.

And let’s not forget Skynet, I mean Google. For the next decade we see the development of various computers, hard drives, robots, processors, and the still in use USB. In the mid 2000’s we get our first 64-bit processor and dual core CPU, a huge jump in speed and power of computing. Speaking of speed, in 2002 we got the first commercial Maglev – short for magnetic levitation train. The world is also introduced to YouTube and thus the innate human need for on-demand cat videos was satisfied.

Also read || How to Choose the Right Career Path?

With the huge growth and commercialization of technology in the last decade or two, data is everywhere. That’s why in 2005 the term Big data is coined. Apple shows its power in the tech field with the release of the MacBook Pro, while the iPhone brings smartphones to the mainstream. In the late 2000s IBM shows off its dominance in the realm of the supercomputer by having the fastest in the world with the blue gene then bettering it themselves with the roadrunner. Block chain arrives in force in 2008 to shake up the financial sector among others.

China and Japan start to push back IBM in a battle for who has the most powerful super computer, with the Tianhe and K computer, respectively. This leads to some of the biggest jumps in computing power. We also see another show of AIs growth with Siri and Watson, who wins Jeopardy against human opponents. And it’s not just on earth where things are getting more advanced with the Mars Rover showing the rest of the universe what we’re capable of.

To exemplify how far we’ve come to this point, in 2012 and 2013 we have supercomputers that reach exascale speed and on our wrists we have computational devices millions of times faster than the computers that sent a rocket to the moon. And did I mention now that our rockets have the capability to land themselves – with a lot more computing power than a watch, mind you.

By 2016 we’ve officially reached sci-fi territory with self-aware Sophia, 3-D printed prosthetic limbs, and realistic virtual reality. At this point we’re looking at molecular computing – because humanity love making small tech… especially things like almost paper-thin laptops with incredibly fast processors and cancer-fighting nanobots. And because we also like to show off, we have the fastest supercomputer at 200 petaflops with summit. New grounds of travel and AI combined with the model S. And Atlas who puts many of to shame with his precision parkour.